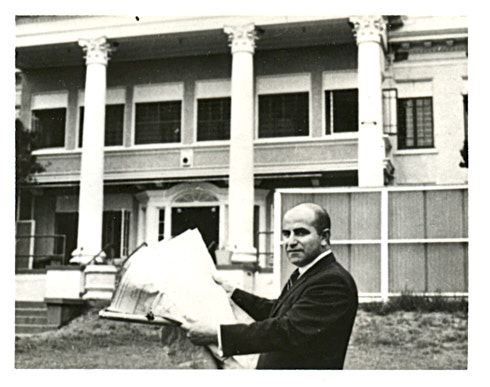 To put this in historical perspective, in 1964 Lyndon Johnson had just stepped into the shoes of the assassinated John F. Kennedy as the President of the United States, the Beatles performed for the first time in America on the Ed Sullivan show, Martin Luther King, Jr. was awarded the Nobel Prize, and Goldfinger with a very young Sean Connery playing James Bond was featured in movie theaters. During this time of social change, the school's founders saw a tremendous need for a classical institution of learning in California that welcomed all children from all cultures around the world. Due to a law that prohibited teaching in California in a language other than English, the opening of this French school was delayed for a year as Mr. and Mrs. Kabbaz hired consultants and attorneys to lobby for a change in the education code in Sacramento. This historical change in the law not only paved the way for the opening of Le Lycée Français de Los Angeles, but also for many other multilingual, international schools, dual language programs and language immersion.

The school officially opened in 1965 with no outside financial help. The first campus was located on Doheny Drive in Beverly Hills. In 1967, the school acquired our present location at 3261 Overland Avenue. The school quickly became well known for its quality of education, its devotion to the needs of students as individuals, and its "open arms" policy for pupils from all walks of life. The uniform with its classical and timeless style was established during the first year and has remained essentially the same since. 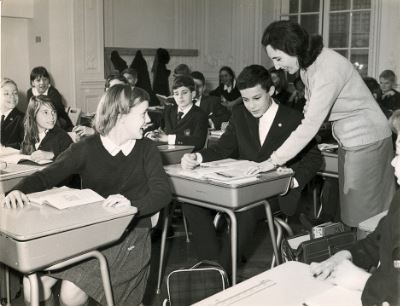 In those many and exciting years, the school expanded to six campuses including two preschool and kindergarten campuses, a lower elementary campus, an elementary campus, and a middle school. In September of 2009, the much-anticipated new 96,000 sq. ft. Raymond and Esther Kabbaz High School opened, providing the school with a gymnasium as well as spacious classrooms, various state-of-the-art learning areas, and a well-equipped cafeteria. In 2000, the modern performing arts theater, Théâtre Raymond Kabbaz, opened at the Century City Campus with professional quality facilities.

Sadly, Le Lycée's community lost the Founders of the school in 2000 and 2004. However, their values and passion have been passed on in the fundamental structure of the school. Many of the people they trusted and worked with over the years are still active in the school. The most notable is Clara-Lisa Kabbaz who has been associated with the school from the beginning (as a kindergarten student) and now serves as President of the school and Headmaster, continuing her parents' work of providing a unique and outstanding international educational experience.

In the future, much will change, but the values and standards of Le Lycée Français de Los Angeles will remain the same. It will always be the top French and International School in Los Angeles with an exemplary American college prep program. 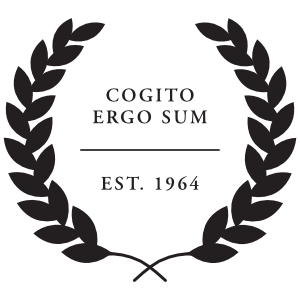 Fifty years ago, our school opened its doors for business, for the first time.

My parents, our founders Esther and Raymond Kabbaz, both teachers at the Lycée in New York, always did everything in style and from the moment they decided to open a Lycée on the west coast they dreamed and planned to the last elegant detail.

Our Lycée, was the very first Lycée in the Western States, and there were only two other Lycées in the United States: New York and Washington.

California’s Education Code did not allow teaching in another language, this did not deter my parents who lobbied in Sacramento to change the Code. Therefore all schools who teach in French or Armenian or German or Spanish or in any other language in California owe them a debt of gratitude!

They rented a building at 150 South Doheny Drive in Beverly Hills from one of the most important people in television, Mr. Art Linkletter. There was no Lycée yet and the ominous 5 year lease rested on my parents shoulders, things could have gone very wrong. However, my father was an ardent believer in positive thinking...

They formed a Board with the help of Mr. Luther Marr, a Disney executive and a founding member. He has always told me how surprised he was when in two shakes the school opened and was full.

That first week, Mrs. Genevieve Peterson, walked into the school to check it out for her daughter Camille and stayed more than thirty years as school secretary.

Mme Newman formerly Mme Hayek was next to join as the best Kindergarten teacher in history and also stayed until retirement in 2004.

The school’s first parent: Agnes Moorehead, Endora from Bewitched. The school opened with all grades K through 12th.

Legendary gossip columnist Hedda Hopper suggested a pillbox hat for the girls which was added to the uniform.

The school was well guarded by Mr. Leon Winfield. A true gentleman and friend for more than 25 years.

Along the way we mourned the passing of colleagues who made a difference: Madame Lanthiez, M. Anselme, and M. Maure.

And, of course, our founders.

l have been thinking about my parents more than usual lately. I have been admiring their strong will to succeed, their hard work, and their incredible talent to make all of their students feel at home. I have heard people my age say that their Lycée years were amongst the best in their lives.

My parents were exceptional people.

Within ten years, by 1974 they had purchased the Main Campus on Overland and the Pacific Palisades Campus. Not too shabby for two young teachers with absolutely NO financial help from any government or agency.

Since our foundation we stand as a symbol of high educational standards, and we will never be too big to care, because we develop the whole student, mind, body, and soul. We replace cynicism with sincerity, we replace indifference with empathy, and we open our students’ perspectives to an international level and it’s a beautiful fulfilling journey.

Our students hail from all over the world and all walks of life, and in this day and age where our youth is not free to be themselves, I am proud to say that our students at the Lycée support and love each other and this magic is unique to our school!

Thank you extraordinary teachers, parents, and students for your partnership in this endeavor. Thank you to the school's leadership team for your insight and dedication.

In the last 14 years since I stepped into my Dad’s role we have made great strides, but make no mistake, that I am guided in every decision by my parents vision and dream, and I can say with confidence that they would be extremely proud of us today!

All LyceeLA campuses are open for full-time in-person learning for Preschool through 12th grade. 100% online learning is also available for students, in all grades. We continue to monitor the state and county public health updates and adhere to their guidelines.

All school information regarding the 20-21 School year is communicated to the community via ParentSquare.